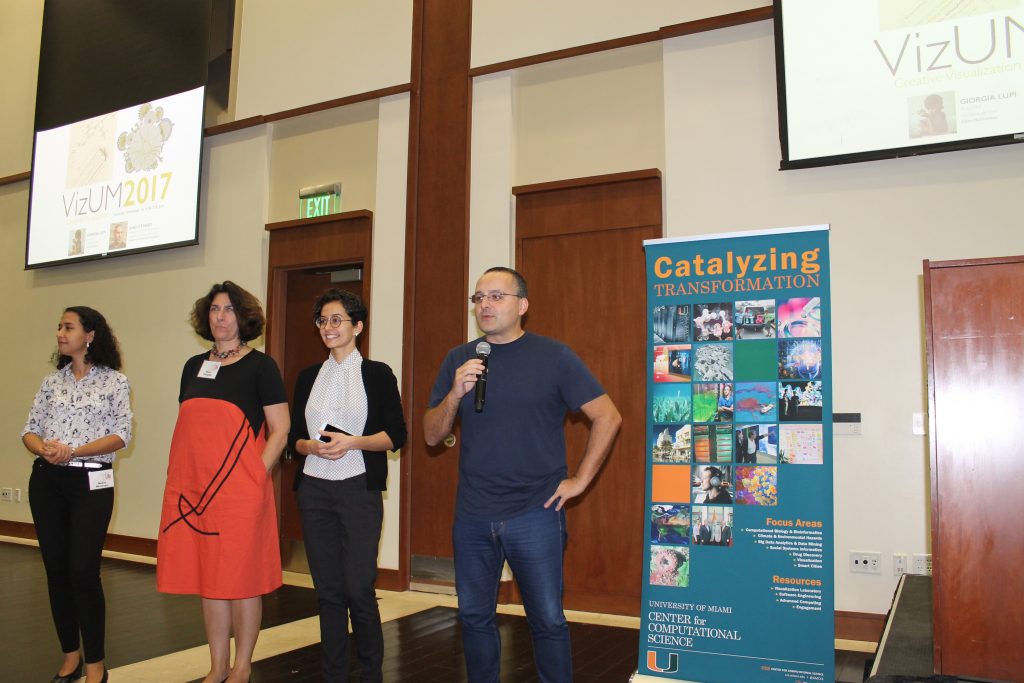 On Thursday, November 16, the University of Miami hosted the 4th VizUM 2017, an annual creative visualization symposium. In celebration of visual representation, the Symposium explored the relationship between art, science, and data through two guest speakers, Angus Forbes and Giorgia Lupi.

Angus Forbes, an assistant professor in the Computational Media Department at University of California, Santa Cruz, and director of UCSC Creative Coding, has a passion for researching and exploring the connections between creative visualization and complex scientific information.

At VizUM, Forbes began the discussion by asking, “Does it make sense to have an art exhibition at a computer science conference?”

Being part of both the arts community and the visualization community, Forbes has noticed that while art is, primarily, representation and personal expression, and holds a rich history in film, design, conceptual art, and phonetics, it does not have much interaction with scientists and practicing researchers. .

In 2013, Forbes helped coordinate the IEEE VIS Arts Program to encourage a discussion between artists and scientists about connecting visualization research and artistic design. Forbes also shared other information visualization projects such as TAG, a project that represents the relationships between words and phrases, and NeuroCave, an immersive program where one can visually explore the functions of connectome datasets collected by neuroscientists.

The second speaker was Giorgia Lupi, an Italian information designer and an expert in the visual representation of data. She started her talk asking the audience, “What is data?” and went on to explain that data is a tool used to represent reality, and could be used toward unexpected purposes, such as creating connections between friends.

“Data is not the point,” explained Lupi. “Rather, data is the medium we use to describe our reality.”

In her work, Lupi explores new ways to display charts and information, including one project where she turned data on people’s interests into buttons that they could wear at a conference. The data transformed into an art chart that communicated a message and was used as an icebreaker.

“We are the data,” said Lupi. “This means we can blur the boundaries instead of defining them.” Lupi touched on how visualization can have a real impact on people’s lives, and goes beyond just charts and pie graphs. By designing new visual languages, we are able to relate and understand data better.

Lupi also explained the concept of data humanism with a postcard project: Lupi and fellow information designer Stefanie Posavec lived across the world from each other. They decided to collect and hand draw personal data about their actions, feelings, possessions, purchases, and other day-to-day details to send to one another on postcards. Through this, they not only learned about the personal lives of each other, but they became friends. This year-long project is now a three-hundred-page book entitled “Dear Data,” which captures the 52 postcards they sent to one another. The original postcards are now a permanent exhibit on display at the Museum of Modern Art ion New York.

For more information regarding Professor Angus Forbes, you can check out his website: angusforbes.com.

If you would like to explore Giorgia Lupi’s work, visit giorgialupi.com.