The University of Miami,  CCS, and the Yucatán State Government’s Information Technologies Innovation Center (aka “Heuristic“), have signed a strategic agreement to create a “UM Computational Science Center for the Americas.”

The Yucatán State Government, on behalf of its Information Technologies Innovation Center have signed a memorandum of understanding to formalize an agreement to work jointly on research, innovation, and technology projects.

“This partnership will foster the hemispheric aspirations I referenced in my inauguration speech, but also I have learned that the founders of this University intended it to be a Pan American University,” UM President Julio Frenk said at the signing of the agreement on Thursday at the Newman Alumni Center. “This is part of our deliberate strategy to take advantage of Miami’s geographical location at the crossroads of the Americas and at the heart of the Americas.” 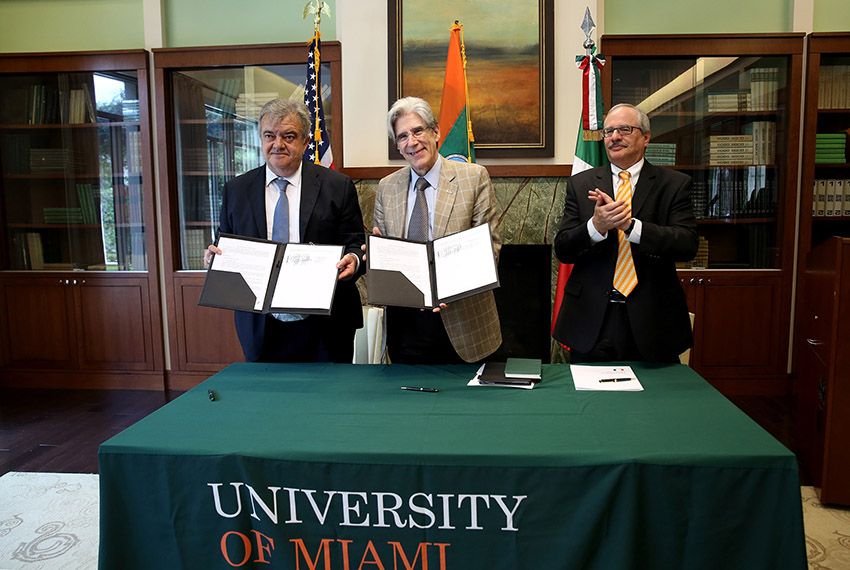 Thomas J. LeBlanc, UM’s executive vice president and provost, and Eric Rubio Barthell, general coordinator of advisors for the State of Yucatan, also participated in the signing ceremony, witnessed by a contingent of about 30 community leaders and UM dignitaries that included School of Architecture Dean Rodolphe el-Khoury and Nick Tsinoremas, CCS Center Director.

Earlier in the day, Rubio Barthell and his delegation from the State of Yucatan toured UM’s Rosenstiel School of Marine and Atmospheric Science, learning about the school’s new Marine Technology and Life Sciences Seawater Complex, and the SUSTAIN Lab that features a wind-wave tank capable of generating category 5 hurricane-force winds. Later in the day, after the signing ceremony, the group visited the Network Access Point (aka “NAP”) of the Americas in downtown Miami, where the Center for Computational Science’s powerful Pegasus supercomputer is located.

Rubio Barthell, who spoke on behalf of Rolando Zapata Bello, the Governor of Yucatan, said that he saw the partnership with UM as “the beginning of a great relationship between Yucatán and our closest brothers from Florida.”

“Yucatán is a dynamic place,” said Rubio Barthell. “We are a center for commerce, universities, and health care. Now we want to be the center for innovation, for research and for technology in higher education.”

The Yucatán government welcomed the partnership with UM in its quest to achieve excellence in research and technology, added Rubio Barthell.

At UM, a major research university engaged in more than $330 million in research and sponsored program expenditures annually, the Center for Computational Science (CCS) is engaged in nationally and internationally recognized interdisciplinary research programs that aim to solve the complex technological problems of modern society, using fundamental and applied aspects of computational science. 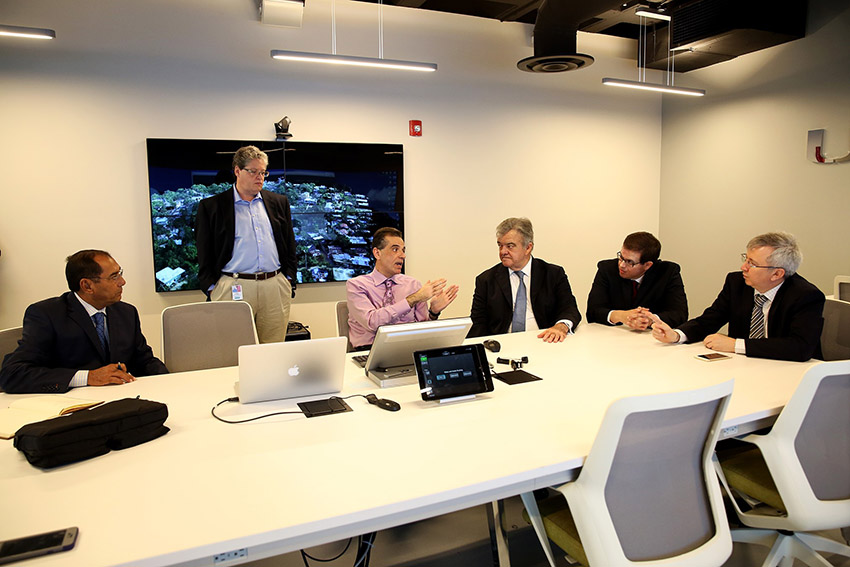 “The focus of this collaboration will be a shared research and development infrastructure based on computational science, and research and innovation projects using that infrastructure. We are especially excited about the potential for joint research and innovation in the area of smart cities, work that has the potential to engage faculty and students at UM from many different disciplines,” said Provost LeBlanc, who added that this project had started eight years ago.

The international collaboration will create a research center to be named “The University of Miami Center for Computational Science for the Americas”, which will ultimately be installed within “Heuristic,” an Information Technology Development cluster, with the objective of creating a prime environment for IT companies to strengthen their capacity for innovation. This will become the R&D (Research and Development) platform for technology initiatives in Latin America.

Since 2012, the Yucatán Government has invested in new infrastructure and provided funds for companies within both public and private sectors to position itself as Mexico’s leading research and development hub, with an emphasis on information and communication technology.

One of the Yucatán Government’s R&D projects is Parque Cientifico Tecnologico de Yucatán (PCTY), which was created to shelter institutions and enterprises dedicated to technology development and innovation. Within PCTY, and in partnership with the regional chapter of the Information Technology Chamber of Commerce (CANIETI), the Yucatán Government has funded and built the innovation center known as “Heuristic.”
About CCS
Established in 2007, the University of Miami Center for Computational Science provides the cyber infrastructure that addresses major research challenges. More than 1,500 faculty, researchers, staff, and students utilize the Center as a nucleus for collaboration.