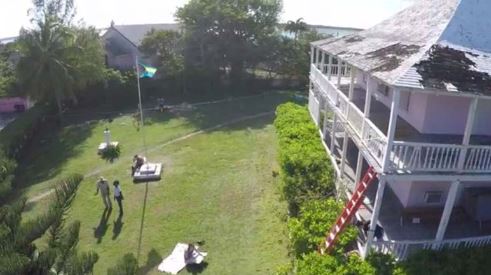 This advanced drawing and research course covers the documentation guidelines for the Historic American Buildings Survey (HABS) set forth by the US National Park Service. Students acquire the ability to:

They gain a fundamental knowledge of how to record historical sites that may require further study, preservation, alteration, or addition. Recently, the course has included digital methods of documentation in conjunction with the Center for Computational Studies, using aerial and frontal drone photography, photogrammetry, and 3D point clouds with control points and GPS referencing to expand the amount of data that can be expediently collected while in the field. By superimposing different techniques, students will be able to evaluate their usefulness and the complementary nature between analog and digital. (The methods here were used by CCS Software Engineering to map “The Residency” a crumbling historic building (formerly the Governor’s home) on Harbour Island in the Bahamas, pictured at right, in anticipation of a restoration.)

The Historic American Buildings Survey (HABS) is the nation’s first federal preservation program, begun in 1933 to document America’s architectural heritage. Creation of the program was motivated primarily by the perceived need to mitigate the negative effects upon our history and culture of rapidly vanishing architectural resources. At the same time, important early preservation initiatives were just getting underway, such as restoration of the colonial capital at Williamsburg and the development within the National Park Service (NPS) of historical parks and National Historic Sites. Architects interested in the colonial era had previously produced drawings and photographs of historic architecture, but only on a limited, local, or regional basis. A source was needed to assist with the documentation of our architectural heritage, as well as with design and interpretation of historic resources, that was national in scope. As it was stated in the tripartite agreement between the American Institute of Architects, the Library of Congress, and the NPS that formed HABS, “A comprehensive and continuous national survey is the logical concern of the Federal Government.” As a national survey, the HABS collection is intended to represent “a complete resume of the builder’s art.” Thus, the building selection ranges in type and style from the monumental and architect-designed to the utilitarian and vernacular, including a sampling of our nation’s vast array of regionally and ethnically derived building traditions.