Climate & Environmental Hazards Program Director Dr. Benjamin Kirtman’s research is a wide-ranging program to understand and quantify the limits of climate predictability from days to decades. The research also involves understanding how the climate will change in response to changes in anthropogenic (e.g., greenhouse gases) and natural (e.g., volcanoes) forcing, and involves hypothesis-testing numerical experiments using sophisticated state-of-the-art climate models and experimental real-time prediction. The group uses and has access to a suite of climate models, climate data, and advanced computational platforms.

One of Dr. Kirtman’s projects is a collaborative effort including scientists from George Mason University and the National Center for Atmospheric Research. They seeks to understand how ocean eddies impact large-scale climate variability. This requires global climate simulations conducted at resolutions that have never before been attempted. Taking two snapshots (Figures 1 and 2) of surface-current speeds shows a big difference in resolution.  Figure 1 shows the typical low res snapshot, while Figure 2  (a high-resolution simulation) captures the details. Capturing the details of these currents has been shown to dramatically affect results in predicting the global distribution of rainfall. 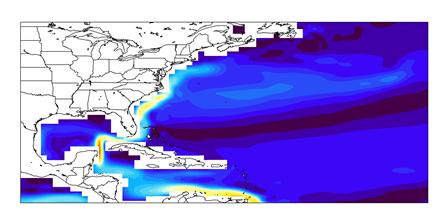 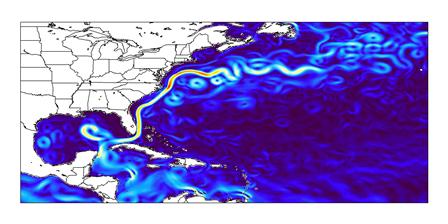 Dr. Kirtman’s research group is also leading an effort to develop a US National Multi-Model Ensemble prediction system for intraseasonal-to-interannual prediction. Figure 3 shows the forecast skill for precipitation (as measured by the correlation between the predictions and observations, red being the areas of greatest accuracy). Figure 4 shows the forecast skill for global sea surface temperatures. The new prediction system has considerable skill in the southern tier of the US, and is being used to understand the mechanisms for persistent drought and the limits of predictability. 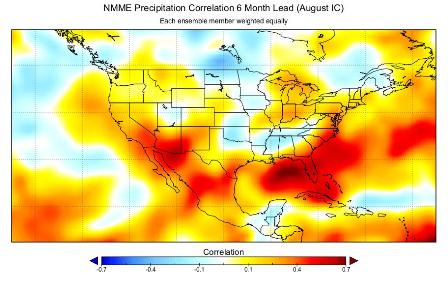 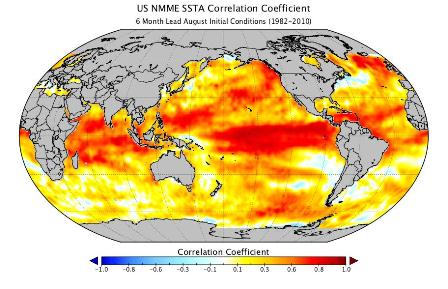 Dr. Kirtman is also the lead developer a new ocean-atmosphere-sea-ice-land coupling system called the “interactive ensemble” that is specifically designed to diagnose coupled (combined) feedback between the component models, and to estimate how high-frequency variability in one component affects the other components. In the example shown below, we have used the interactive ensemble to diagnose how atmospheric weather impacts the low-frequency meridional overturning circulation in the Atlantic Ocean. This meridional overturning circulation is critical for maintaining the relatively warm climate over Europe. These images show the mean meridional overturning circulation from a simulation with realistic atmospheric weather (Figure 5), and from the interactive ensemble simulation with reduce atmospheric weather (Figure 6). 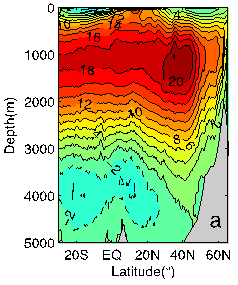 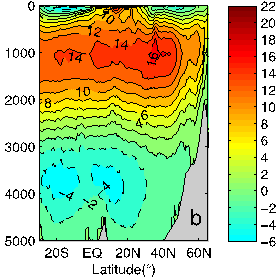 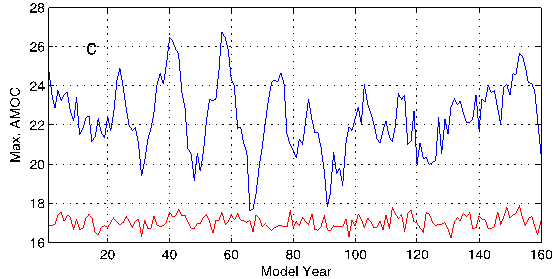 The result suggests that atmospheric weather is an important factor in the overturning circulation.