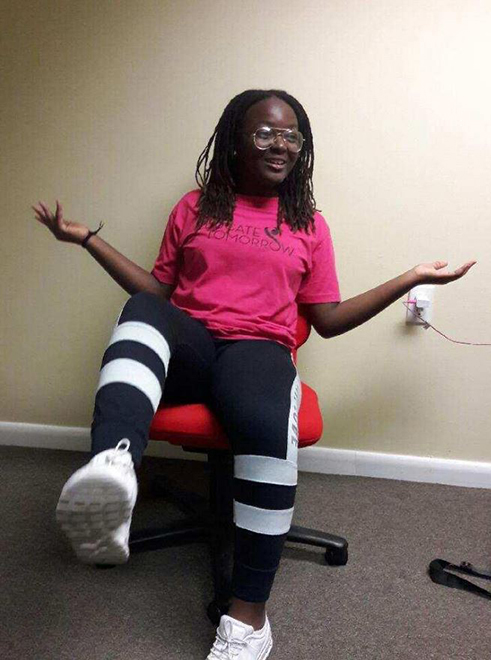 What did you do during the summers when you were a teenager? Did you play video games? Did you spend your time at the pool or beach? Or perhaps you favored the park? For 17 local girls, this summer has been all about learning computer science.

Most of these future coders are in high school, though some are younger. And about half of them are in foster care. It was a sunny Thursday morning in July when they got to show off all they had learned in the six-week college readiness ‘camp’, four of which were focused on data and computational science.

Click to hear Ashley Adirika’s comments
“This camp actually taught me a lot about myself, as well as things I can use for my future, so I think I’m set,” said Ashley Adirika, grinning behind her round eyeglasses.

Adirika is 12. She had no interest in computers or coding before the camp, but on her last day, she felt empowered standing beside her final data visualization project. She had spent a week collecting data on her interactions and made illustrations based on her observations.

This was the first year of the Data Scholars program, hosted by CCS, The Children’s Trust, and Educate Tomorrow, a nonprofit that provides mentorship and tutoring for children in the foster care system and underprivileged youth.

Athena Hadjixenofontos is the director of engagement for CCS and she came up with the idea for the Data Scholars. She says she was motivated by what she’s witnessed firsthand in her work:  Data isn’t going anywhere.

“It is a field that has infused itself with every single discipline,” says Hadjixenofontos.

But she also noticed that the algorithms used for everything from curating Facebook news feeds to controlling GPS are also being used for facial analysis. And when algorithms aren’t coded by certain populations, it becomes an issue of visibility.

“If it’s trained without faces of black people or Hispanic people or Asian people in that data set, then the algorithm won’t learn those faces,” she said.

In computer language, if an algorithm can’t read a face, it can’t acknowledge its existence, and it could even mislabel it. This may not seem like an urgent issue, but law enforcement uses facial analysis to identify suspects, so mislabeling could have severe consequences even in the short-term.

So Hadjixenofontos set out to start training the next generation of black, brown, and non-white computer scientists and code experts. Throughout the four weeks, the Data Scholars spent time learning how to code, how to visualize data and how to think critically about complicated issues.

She said she hopes the students feel empowered to take on the digital future by using some of the skills they learned at Data Scholars.

Educate Tomorrow’s goal is to open doors for its students, and that includes upward mobility through professional training. But at the heart of it all is mentorship. Devin Floyd, the director of mentoring, says the guidance and support the program provides is vital for kids.

“It’s just so crucial to have that one person that’s going to go anywhere … they change case managers, foster homes, foster parents, and it’s really great that we can get them a mentor because quote-unquote normal individuals have parents that are always there,” he said.

The organizers are planning to create a free curriculum for teaching data science and making that framework available for use anywhere. They are also planning to host the Data Scholars program again next summer.

For Ashley, it’s back to middle school life, but now she has computational skills up her sleeve (and then some).

“I learned that I can do anything that I want. I just have to be focused,” she said.